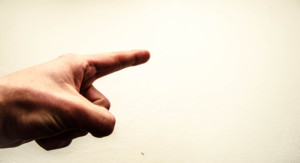 Let’s face it. We all have the tendency to blame, especially when we are feeling defensive in the presence of disappointment, pain or vulnerability.

Blaming is a common reaction, because when we want to protect ourselves, we employ cause and effect reasoning (THIS happened because of THAT). It gives us the impression that we have control over avoiding future pitfalls. For many, the blaming mode eventually subsides, allowing for movement towards some form of acceptance and mindful response to the situation at hand. Some people, however, develop ongoing patterns of long lasting blame when things go wrong, either by blaming others or by blaming themselves.

“Blame externalizers” hold other people responsible for their circumstances and even for their own behaviors. “It’s my boss’s fault that I drink every night”, says the employee who feels overwhelmed and undervalued at work.  The “blame internalizers” jump to self-blame in the face of trying circumstances. “It’s all my fault”, thinks the child whose parent constantly lashes out at him, as he finds a way to feel like he has some control over his physical and emotional safety. Not only can pronounced patterns of blame create discontent in your relationships and roadblocks to your life goals, they can contribute to feelings of depression, anxiety and stagnation.

There are a variety of reasons why people continuously play the blame game. Those who have a tendency to blame others may be partaking in a type of “offensive-defensiveness”, meaning the outward expression of blame serves as a shield from internal feelings of helplessness, shame or invalidation. They perpetuate their role as victim, which results in toxic anger, alienating those around them, and further disempowerment. The need to be right (or more precisely the need not to be wrong) gets in the way of moving forward with the ability to put their energy into actions that would actually increase the likelihood of achieving happiness, connection and satisfaction.

Those who have a tendency toward self-blame may have issues related to perfectionism, control, self-doubt, and sometimes depression. Whenever something happens that feels threatening (whether physically or emotionally), their first reaction takes the form of finding fault within themselves. Their subsequent thoughts are focused on regret and fear around having made a mistake. They ruminate on how certain problems wouldn’t exist had they handled a situation differently or they might fixate on how one of their past choices caused their current predicament. This negative thinking cycle burdens the self-blamer with an unrealistic level of responsibility as it simultaneously erodes their self-esteem and self-confidence.

“Blamers” tend to seek therapy when they are experiencing inner turmoil, relationship problems and/or career dissatisfaction. With psychological exploration, they realize that they are being held captive by their own automatic reactions and continuous narratives pertaining to right and wrong or fair and unfair. Their knee jerk reactions have kept them stuck in the past, stuck in their thought processes, and stuck in patterns of behavior that repeatedly clash with their personal well being, i.e. having healthy relationships, a strong sense of confidence or feelings of fulfillment. I’ve often worked with clients who had been so consumed by blame, that they had become increasingly removed from their true desires in life. Therapy helped them get in touch with their genuine wants and needs related to personal and professional objectives, so that they could pursue an intentional road to success.

If you have been impacted by a traumatic event, an upsetting situation or an ongoing struggle, it can be highly productive to gain a comprehensive understanding of the circumstances, thoughts, feelings and reactions that have shaped your experience and its aftermath.  Whether it’s an unfortunate incident, a conflicted relationship, a dead end job, or a long lasting family dynamic that causes you distress, gaining insight and perspective will not only help you to process the past, but enable you to take the reins on influencing your future. Seeking an in-depth understanding of your experience is very different from getting stuck in a mode of blaming yourself or others for your current existence. Establishing productive goals and navigating a path of clear intentions will enable you to locate the exit door out of the blame game.